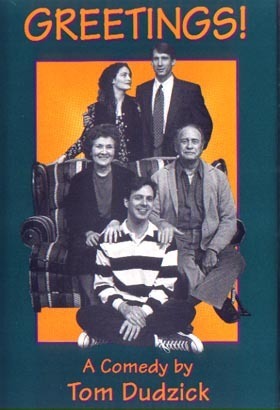 Tom Dudzick’s “Greetings!” is a miraculous comedy that has become a welcome alternative to “A Christmas Carol” in theatres all across the country.


LOS ANGELES TIMES:
“Greetings!” is a wonderful, wacky look at how cleverly a mixture of Christmas, Hanukkah, and New Age philosophy can--in the right hands--flick on the electricity.


JOHN GRAF, JR., THE SOMERSET SPECTATOR:
It was well worth the wait. Written partially from a true-life experience, the author brings home more than just a two-hour family brawl on religious beliefs. The work also takes on the sensitive subjects of death, prejudice and objective versus subjective reality. “Greetings!” is the perfect holiday gift for a loved one. Whether you celebrate Christmas or Hanukkah, this “guess who’s coming to dinner” comedy should not be missed.


STUART DUNCAN, TIME OFF:
“Greetings!” is a play that only the cynics will hate. The work by Tom Dudzick is receiving its world premiere at George Street Playhouse and it is a delightfully old-fashioned blend of warm family humor and joyous “new age” fantasy that leaves an audience limp from laughter and with just the hint of a tear in the corner of the eye. This is no message play. The values are homespun. There is nary a mention of sex or drugs. How exciting to find a playwright who can work without those crutches. It is quite the best new play to come along in several seasons. Don’t you dare miss it.


JIM BECKERMAN, NEWS TRIBUNE:
In the expert way it plays every audience-pleasing trick in the book, from the clockwork gag lines to the tidbits of New Age philosophy, to an uplifting ending that even Steven Spielberg would have thought twice about, it’s as smooth as a con man trying to talk his way into your house. The twist itself is a great one, theatrically speaking. Leave it to American ingenuity to take the most profound subjects and render them as entertainment that would disturb nobody.


BOB COYNE, ASBURY PARK PRESS:
Audiences will absolutely love it. It ends on such a genuinely sweet and heartwarming note.


TED OTTEN, THE TIMES:
Cynics may scoff at Tom Dudzick’s comedy “Greetings!” but the rest of us can find a warm, hilarious, touching and endearing visit to a family blessed with a miracle. It is delightful from start to finish. The comic one-liners are rattled off with machine-gun precision, but there is also breathing room, especially in Act Two, to let some weighty philosophy sink in. It’s easy to be swept into what we know couldn’t possibly be happening and be totally enthralled with it all. I won’t reveal the plot because I want you to go and discover it for yourself. It’s well worth the effort, and if you’re a weeper, bring a hankie. “Greetings!” is a comedy, a domestic drama, a fantasy and the kind of play that comes along all too rarely. Don’t miss it.


J.R. SOUTH, ALBANY TIMES-UNION:
Exhilarating, profound: what ineffective little adjectives to describe “Greetings!”, Capital Rep’s latest offering at the Market Street Theatre. Tom Dudzick’s play smacks of the warm, old fashioned appeal of a Frank Capra film, but it’s all of that and much more. It’s an antidote, not only for pre-holiday anxiety, but for the apathy of modern life and the deadness that settles in when we become so adjusted to looking at things in a certain way that we no longer see them at all. Die hard pessimists will find the advice it offers simplistic. But of course the question is: if it’s so simple, why is it so difficult?

“Greetings!” is that true rarity: a play that people leave the theatre talking about. None of its publicity has accurately captured what the play is really all about, and perhaps that’s just as well, allowing audiences to discover it for themselves. But if word of mouth holds any weight, Cap Rep will probably have an enormous hit on their hands. Despite its seasonal setting, “Greetings!” has a far-reaching impact that will linger on for a long, long time.