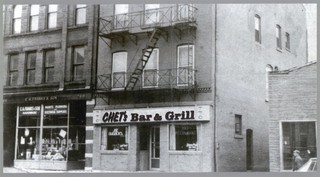 "Christmas Over the Tavern"

PRAISE FOR "CHRISTMAS OVER THE TAVERN"

In this endearing, moving and hilarious holiday musical we meet the Pazinskis, 4 kids and 2 parents living over a saloon in lower-middle class Buffalo, NY.

Christmas 1959 is not very merry for the Pazinskis. Dad is going through a mid-life depression and refuses to buy a Christmas tree. Sister Clarissa is threatening to expel 12-year-old Rudy for performing a blasphemous one-man Nativity Scene where he plays all the characters as Hollywood celebrities. Mom wants the happy man she married returned to her, and the two teenagers, sensing their parents' discord, are worried that this may be their last Christmas together as a whole family. It's a brand new chapter in the Pazinski Saga -- featuring 14 original songs.

MELINDA MILLER FOR THE BUFFALO NEWS:

Step aside, Mr. Hamilton. There's another hot show playing in Buffalo this month, and those lucky enough to have their tickets better hang on to them. The world premiere of Tom Dudzick's "Christmas Over the  Tavern" sold out its entire month-long run at MusicalFare before the show even opened!

MusicalFare Theatre has a hit on its hands. If you do not already have a ticket, you are out of luck. The entire run is sold out. Take that, Hamilton! Like the Over the Tavern series, it speaks to a wide audience in its depiction of family struggles and religious zealotry. It is also a great deal of fun and a blast from the past.

The strength of the show is its delightful nostalgia ...some fabulous stuff... the audience just loved it!