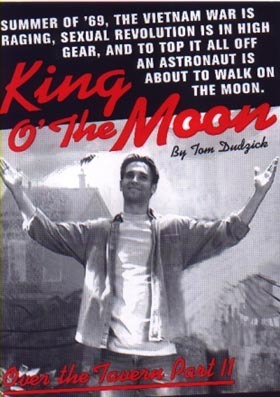 For inquiries about scripts and performance rights, please log on to www.playscripts.com.

King o’ the Moon
(Over the Tavern, Part II)

PRAISE FOR KING O' THE MOON

ALICE T. CARTER, INTHEATER MAGAZINE:
“King o’ the Moon” transports the Pazinskis from the conservative ‘50s to the rebellious ‘60s. Rudy, now 22, is a seminary student honoring his father’s deathbed wish that his son should become a priest, Brother Eddie is married, on the brink of fatherhood, and about to ship out for Vietnam. As the play opens on July 18, 1969, Apollo 11 is about to land on the moon; Rudy has gone AWOL from the seminary to participate in his first anti-war protest; Sister Annie is contemplating divorce; and romance is blooming for Rudy’s widowed mom, Ellen.

The new play--like the decade in which it is set--has a greater urgency and sharper realism than its predecessor, as the adult Pazinskis tackle grown-up issues like divorce, remarriage, war and draft-evasion.

Dudzick is well on his way to becoming the Neil Simon of the Catholic, Polish-American working class; he has already started work on a third play that will take the Pazinskis into the 1970’s. “I think I’ve struck a nerve,” he says.


CHRISTINA M. ABT, HAMBURG SUN:
Sequel. That foreboding word in theatre and literary circles that often translates into the proverbial “kiss of death.” Sequel successes are rare. Hence when a sequel does strike gold, critics, authors and audiences rejoice. It is not only a chance to celebrate a rarity in literary or theatrical circles, but also an opportunity to once again enjoy the old slipper comfort of characters and locales that were so entrancing originally.


DAVID FIELDING, PITTSBURGH THEATRE CRITIC:
Dudzick’s play will no doubt at some point be referred to as a Catholic’s Brighton Beach Memoirs, with its lovable down-to-earth family members and well-timed comedic happenstances. Yet it is original and real--a slice of Americana that helps us all remember what being a family is all about.


CHRISTOPHER RAWSON, PITTSBURGH POST-GAZETTE:
What is true about individual plays may be also true about Dudzick’s Pazinski family saga--that it reaches a better end for taking its time getting there. Although less flashily comic than “Tavern,” “Moon” has more sympathetic ambiguity. I look forward to seeing where else Dudzick’s journey takes him and the Pazinskis.


KENNETH JONES, PLAYBILL ON LINE:
The Pittsburgh Public Theatre’s production of “King o’ the Moon” is mirroring the hit status it had in Buffalo in December: The comedy’s been extended one week. Dudzick’s play was to run through Feb. 7, but enthusiastic audiences will keep it going longer. Sell-out crowds have been standing at the curtain calls in Pittsburgh, as they did in Buffalo.


JOHN SIMONDS, THE RENSSELAER BEACON:
Tom Dudzick’s play has taken inertia out of sixties nostalgia and brought to life an honest take on family and an honest look at tolerance. “King o’ the Moon” is dynamic entertainment from the very beginning.


BRYCE BUTLER, THE ALTAMONT ENTERPRISE:
Albany’s Capital Repertory Theatre has extended the run of Tom Dudzick’s “King o’ the Moon” through Dec. 23. So good seats are available for the last week of the show. Run, do not walk, to get one of those seats. “King o’ the Moon” is not to be missed. The play ranges from physical farce to the most serious engagement with life and death. A responsive audience Friday evening was whipsawed between out-loud laughter and deeply silent attention.


MICHAEL ECK, ALBANY TIMES UNION:
The Pazinskis are back, with bigger problems and bigger laughs than before. It is both funnier and deeper than its predecessor, “Over the Tavern”. “King o’ the Moon” will surely be as successful--and prompt as much word of mouth--as “Tavern” did. Deservedly so. This is not the kind of theatre that critics love, but audiences do.


CATEY SULLIVAN, PRESS PUBLICATIONS/NORTHEAST DUPAGE:
It isn’t necessary to have seen “Over the Tavern” to be immediately drawn into “King o’ the Moon”. The Pazinskis are compelling to watch whether one knows their history or not. A breezy comedy marked by more than a dash of heartache and poignance, “King o’ the Moon’ is a clever hybrid of dysfunctional family sitcom and emotional gut wrencher. That’s not an easy mix to create, but playwright Tom Dudzick manages it.


LEAH A. ZELDES, WICKER PARK BOOSTER:
Tom Dudzick’s done it again. His follow-up to the wildly popular “Over the Tavern”, set a decade earlier, offers another warm, funny and bittersweet look at American family life, tinged with bright nostalgia but edged with dark realism.

Those who saw the first play, which ran here for more than a year, will enjoy seeing how the family has developed. As a sequel, “King o’ the Moon” is pretty self-contained. It may be set in the playwright’s hometown of Buffalo, where it premiered, but it’s very much a Chicago-style ensemble piece. Where “Tavern” focused on 12-year-old Rudy, and to an extent on his bad-tempered dad, this second play gives us a much more well-rounded view of the family members.


CHICAGO BUSINESS:
“Over the Tavern” was a hit across the country, enjoying an extended run in Chicago. “Moon” has all the elements of a hit, as well. It is a sweet and delightful family comedy with just the right amount of character turmoil to give it a purposeful existence. Each family member faces some independent change or decision in life, which Dudzick then interrelates to each other’s lives, allowing the family members to reach out to one another and help them overcome their fears and problems together.

Dudzick’s script is quite funny and the cast relishes the comedic scenes as much as they dive deep into the dramatic ones. “Moon” is nicely self-contained; one need not have seen “Over the Tavern” (or be Catholic) to enjoy this show. This solid production deserves a long Chicago run.


DOUG SMITH, NIAGARA FALLS GAZETTE:
“King o’ the Moon” rules. The second stage of Tom Dudzick’s “Over the Tavern” trilogy touches down at the Studio Arena with a full payload of laughter, drama and sympathetic recognition.

The season can’t run long enough to accommodate all the patrons with the potential to be touched and entertained by this wonderful play...better than any of its “Over the Tavern” predecessors, and more marketable. “King o’ the Moon” is, to paraphrase the singular quote of its time, one giant leap for Dudzick.


CHRIS JONES, CHICAGO TRIBUNE:
Playwrights looking for decent careers in American theatre usually feel they must pay homage to the powerbrokers in New York who like to think they know what the rest of the country will pay to see. But Tom Dudzick, the immensely popular writer of “Over the Tavern” and its sequel “King o’ the Moon”, made a beeline directly for a nostalgia-loving audience that couldn’t give a hoot about the latest flashy new thing.

Dudzick’s writing offers an enjoyable piece of escapist theatre with distinct, memorable characters and a message of family unity that will seem welcome to many during these hard times.


HEDY WEISS, CHICAGO SUN-TIMES:
This is a “Moon” that winces with pain and winks with joy. In its easy accessibility, this is a play that sometimes feels like an all-American musical comedy without the music.


TIM SAUERS, GAY CHICAGO MAGAZINE:
Dudzick presents the tensions and struggles associated with the nuclear family, fortunately without falling into nostalgia-for-nostalgia sake syndrome. He weaves throughout his tale darker messages pertaining to the world at odds that brews underneath the surface but purposely keeps the comedic elements in the forefront.